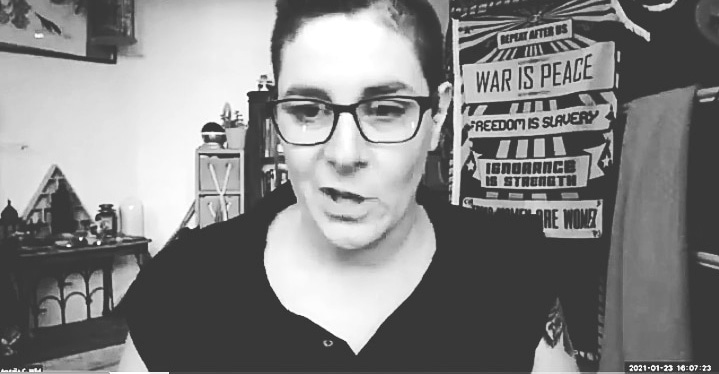 I was invited to speak at the WHRC Declaration on Women’s Sex-Based Rights live event. I spoke about the importance of Art in activism.

Thanks so much to the amazing team of women who put up these events every week. You can sign the women’s declaration for sex-based rights here: https://womensdeclaration.com/en/

You can view my talk here. Transcript below.

Some forms of activism are very valued in our movement such as academic work or lobbing government to change laws are held in high esteem. But an aspect that is often overlooked because considered not important or soft, is cultural or artistic activism. What I wanted to do this presentation about to talk about why it is in fact a very important aspect of our struggle.

I do not differentiate between Art with a capital “A” and art and craft. Most art with a capital “A” in art history is male art placed on pedestals by male critics to promote male ideology. While in opposition crafts are considered women’s work, not placed on a pedestal, not generally given as much cultural importance as artefact, they are considered women’s work and as such scorned. I am raising that point because it is our job as feminist to challenge this division and hierarchy. One of the reasons maybe we generally do not value the work of feminist artists on the same level of academics or lobbying groups is because of this hierarchy.

It is possible we misunderstand and underestimate the role and power that images play in the shaping of our world.

There are different way patriarchy functions to maintain its power:

We can consider that patriarchy is a network of intertwined structures and institutions that work hand in hand to keep men in control of the world. On one hand Academia: the production of ideas is a crucial aspect of this system; on the other hand the legal system’s role is to enforce these patriarchal ideas in the law.

The cultural and artistic institutions such as the media, the art world’s role is to propagate patriarchal ideology to us, the masses.

Patriarchy is in full control of the main means of cultural production and propagation.  We know that TV, media, newspapers, the art world, publishing, fashion, the music industry, the film industry are all industries controlled by men and are used to spread patriarchal propaganda 24/7. The media machine does not stop.

We live in a world saturated with images. In the west, the average person is now estimated to encounter a few thousand adverts every single day! If you add to that images in newspapers, internet, films or series you might watch, the news, music videos etc… that is an incredible amount of visual information we are bombarded with every single day.

These images are mostly created by powerful patriarchal machines. They are designed with a purpose and an agenda, whether to sell a product or an ideology or both. No image that you see is neutral.

It strikes me that it is part of the curriculum of every school at least in the west to teach children to read and write. And if we are very lucky we are taught a bit of critical thinking too. Yet it is not very common that school will provide systematic visual literacy course. We are not generally taught how to read an image. How to understand how it was made, what this image says, how it functions and how it is received by its audience. This lack leaves us I think rather powerless in front of the media.

In contrast, the patriarchal media machine knows how to construct an image to convey a message and to manipulate the audience emotions in order to reach their aim. Which is to sell us an ideology.

To take a specific example that is relevant to gender, you might have noticed that not every aspect of transactivists fight against lesbians and women is law-based or academic. In fact, transactivists spend a lot of time, energy and money infiltrating the media and the art world and making sure their ideology is omnipresent there also. In the last few years, we have seen how most media outlets have very one-sided reporting on transgenderism, erasing the voices of women who dissent, we have seen the rise of the trans-celebrity culture, the transitioning of very visible actors and actresses – and sometimes their children raising the visibility of trans ideology exponentially. In many ways, this constant bombarding of pro-trans ideology via the media feels like an endless cultural tsunami. That should give us a clue that images are indeed a very important mean for patriarchy to change mentalities without having to change the law.

And equally for dissident such as feminists, culture and art can be very important activist tools we have at our disposal to fight oppression.

In the suffragette movement we are in front if a movement that clearly understand the power of art and visuals in the creation of a political and cultural force of dissent. Suffragettes were fully exploiting the power of art in all its form, not only in the form of visual art and illustration, in fact, art was involved in every aspect of their activism, from medals for activists who were jailed or survived force-feeding, to tea-set, board-games, the magnificent banners and astounding processions that were stunning displays of suffragette fashion and highly staged performances. Suffragettes had their own newspapers and magazines, they created jewellery, stage plays, hymns, they used very ingeniously and illegally the act of defacing coins for political purpose. Overall this created very visible, recognisable and appealing visual identity that benefited their struggle. Some have criticised that the WSPU’s image was a corporate visual identity. I still think that the suffragette identity was genius visual identity, the sign of a movement that takes itself seriously enough to believe in women’s culture in every aspect, bold enough to create an entire culture centred on its needs

Art and feminism in the “gender-wars”

With such a power imbalance in the access to cultural production and broadcast, it is very much a David vs Goliath situation

In context feminist art often acts as a grain of sand in the patriarchal cogs of the media machine. A way to bring our message guerrilla-style and to disrupt the narrative imposed by the malestream.

FEminist art is often hilarious; humour is a great way to convey a political message and to highlight the absurdity of the situation. These examples show ways to fight for our vocabulary, our right to self-definition, highlight the extent to which we can speak, use certain words or not, and of course our ability to think beyond the patriarchal censorship. These kind of actions are great ways to expand what women are allowed to say or think.

Acts and objects of defiance such as stickers or badges, as tiny as they are, help highlight the fragility of the patriarchal system who can not tolerate even the smallest expression of dissent or it might just collapse. That’s why the patriarchal backlash always appear of out of proportion.

With art we can convey a political message, rally support around a particular cause, educate and raise awareness on specific issues.

We can also use art to provoke or to put the backlash under focus, which is a great way to raise awareness.

Our role as feminist artists is of course to show the utmost form of disrespect to patriarchy.  And this is where comics are a particularly relevant and often hilarious form of art

Social media plays a great role in this so do demonstrations and conferences and gatherings. because feminism for many of us is not just a lobbying exercise. It is our lives, how we speak to each other, the vocabulary we use together, how we work collectively, how we bond together against the oppressor, the resistance strategies we put in place.

Visual culture has a crucial part to play in this. In fact, it is the role of the artist-activists to capture this emerging culture and to create a visual vocabulary for it. It is mainly to create rallying feminist iconography and female centred visual archetypes, the visual codes we recognise each other with sometimes secret codes only those aware of the debate will understand.

Altogether these works create a visual subculture. this is a crucial aspect of feminist cultural self-defence and resistance.

Art is of course a way to see the world as much as it is a way to change the world. The role of the artist is to create, create the solutions we need for the problems we face today, it is to have a vision that another world is possible, it is to imagine this feminist new world we would like to live in.

Activism can take many different shapes. In the spirit of some of the work of the second wave, the feminists who created the women-only spaces we needed such as rape-crisis centres and women’s shelters, with no funding and no male approval, we could also consider that we can focus on ourselves as women, again, regroup with other women and start building what we need instead of asking men for authorisation or funding, or simply to be nicer.

When things seem the most impossible, when our aims seem to be the most unreachable, art is a great way, maybe the most appropriate way to dream this vision of a different world we could create if we just stopped asking men permission for everything.

I hope this little talk inspire you to take your pencils, your watercolour, your spray cans, your embroidery kit… and express your feminism creatively.

1 thought on “Art and Activism”

For Womyn by Womyn

I am Angela C. Wild, Lesbian feminist, political artists and activist based in the UK.
As a Radical Feminist (NOT the fun kind !) I wanted to wear my politics and could not find the kind of merch I was looking for.
This is how Wild Womyn Workshop is born: a range of unique and beautifully designed items for radical womyn. Expect dissent, sarcasm and utter disrespect for the patriarchy.

Wear your politic with pride! Raise your flag!

Find me on social media

Why Womyn with a Y ?

The word womyn is one of several alternative spellings of the English word women used by feminists. There are other spellings, including womban or womon, and wimmin. Using the word womyn as opposed to women is an expression of female independence and a repudiation of traditions that define women by reference to a male norm because the alternative spellings avoid suffix “-man” or “-men”.

“Not tamed or domesticated, not associated with men, uncontrolled, ungovernable.”
Mary Daly

The time I need to prepare an order for shipping varies. For details, see individual items. Most orders ship within a week. T-shirts are print on demand when not in stock. Lead time is 2/3 weeks before shipping.

I gladly accept returns and exchanges

I ship worldwide. You can now choose between "standard" or "tracked and signed" shipping. If you require a tracking number please make sure to select “tracked and sign” as I will not be able to provide you with a tracking number otherwise. Please keep in mind we are still in the middle of a pandemic and items once shipped could take longer than usual to get to you. Thank you for your patience.

Contact me for more info or if you have any problems with your order: wildwomynworkshop@gmail.com

Leadtime: Count about a week before shipping for most items.

Hoodies and any items on preorder is about 3 weeks leadtime.

>>> Due to limited time, BADGES will only be available on the 1st week of each month <<<