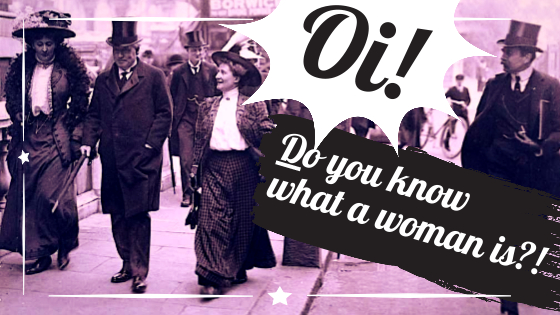 Yesterday I received this wonderful email from one of my customers.

Beyond the fact that I am super proud that my gear are worn with their intended purpose – political battle-wear – I was really moved to read that within that awesome woman – who strangely doesn’t see herself as “the stuff of resistance”, there is rebellion, there is dissent, there is a voice and the urge to speak up on behalf of women and girls.

Regardless of how “sensible” and well socialised in the female role we have been, resistance is there in all of us, it is fertile and it is catching!

Heckling is back in fashion! And as the male-lead woman-hating political parties are all out in force to try and make us believe that they will listen to our concerns this time (hmmmhmmm) I would say it would be a real shame to not continue their legacy, take a leaf from her book and do the same all over the country!

And let them all dread our legitimate female rage!

I leave you with the words of this modern-day suffragette (shared with consent and redacted to protect anonymity.)

I am so not a Fearless Amazon but…

I just want you to know that there is something weird going on with your tee shirts! I didn’t even realise I was wearing my ‘Fuck nice, Raise hell” from you this morning, under my super sensible navy jumper dress. Just wearing it as a thermal base layer.

Did my grocery shopping at Sainsbos with my 12-year-old daughter, tootling down the travelator with our trolley, when sailing stately in the opposite direction, was my Labour MP. ‘Oi!” I called, “can you tell me what a woman is?”

Look of complete incomprehension from man that short, silver-haired, stout middle-aged woman (= ‘invisible’) had addressed him. Running out of travelator, I yelled, “I’ll help you. It’s Adult Human Female”.

My daughter looked at me and said, “mum, you rock”.

Truly, I was shaking.

People like me are not the stuff of Resistance. Something took hold of me. Must have been the Power Vested in My Wild Tee Shirt.

I actually work in a university on a rolling contract. I am very vulnerable to being ‘cancelled’ by colleagues and students if they knew of my GC beliefs. But somehow, I momentarily stuck my head above the parapet.

I will now go and recuperate with a nice cup of tea.

Tara Hewitt pushed me over the edge. To discover that’s who has the ear of CEOs obliterating single-sex spaces in the NHS which 51% (the female half) pay for through our taxes just as much as the 49% do…..

All best, keep on with the designs, they are channelling some serious superpower energy.

Now it is your turn!

For Womyn by Womyn

Hey! I am Angela Wild, a political artist, a lesbian feminist activist member of Get The L Out and a writer. Wild Womyn Workshop is a Lesbian owned and female-centred radical feminist shop for fearless Amazons who are sick to be told to shut up and who like to wear their politics!

I design uncompromising, beautifully designed radfem merchandise with a strong, unapologetic political content, a pinch of sarcasm, a total disrespect for patriarchy and plenty of fierce Lesbian visibility.

When you buy from my shop you allow me to remain autonomous and independent which in turn allows me to speak up uncensored.

Find me on social media

Why Womyn with a Y ?

The word womyn is one of several alternative spellings of the English word women used by feminists. There are other spellings, including womban or womon, and wimmin. Using the word womyn as opposed to women is an expression of female independence and a repudiation of traditions that define women by reference to a male norm because the alternative spellings avoid suffix “-man” or “-men”.

“Not tamed or domesticated, not associated with men, uncontrolled, ungovernable.”
Mary Daly

The time I need to prepare an order for shipping varies. For details, see individual items. Most orders ship within a week. T-shirts are print on demand when not in stock. Lead time is 2/3 weeks before shipping.

I gladly accept returns and exchanges

I ship worldwide. You can now choose between "standard" or "tracked and signed" shipping. If you require a tracking number please make sure to select “tracked and sign” as I will not be able to provide you with a tracking number otherwise. Please keep in mind we are still in the middle of a pandemic and items once shipped could take longer than usual to get to you. Thank you for your patience.

Contact me for more info or if you have any problems with your order: wildwomynworkshop@gmail.com